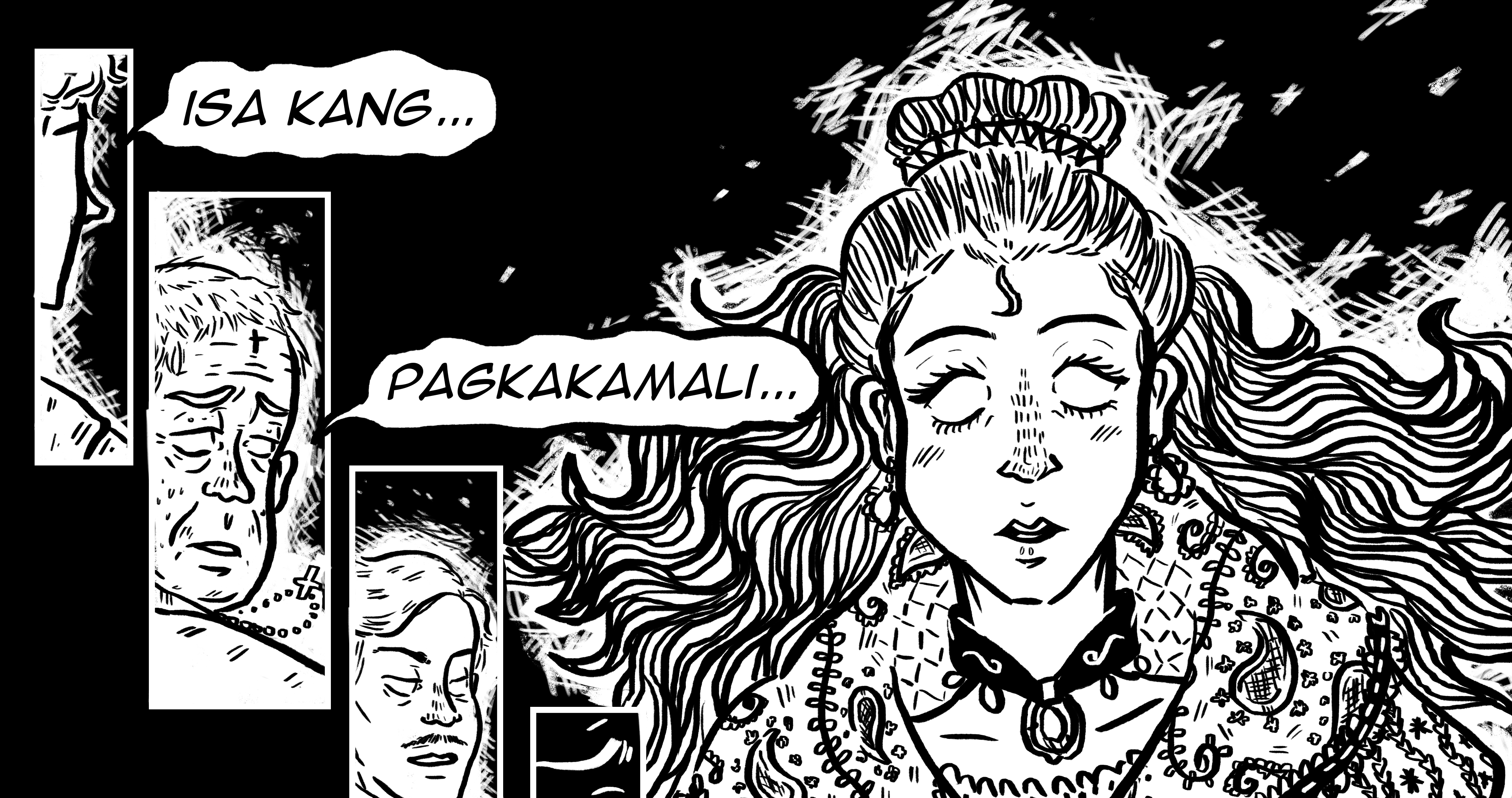 This is part of a series of interviews where we feature creators, their comics, and the creative process behind all of it.

Maria Clara is evolving. What started out as an archetype to represent the colonized Inang Bayan in Jose Rizal’s Noli Me Tangere, the Filipina icon is being rewritten as a bridge between the conservative and liberated ideas of what a Filipina should be in Marianie’s “Nagmamahal, Maria Clara.” Here, the dalagang Filipina is transported to 21st century Metro Manila, braving the strange new world of showbiz.

The komiks is a tribute to everything that a Filipina can be, tackling feminist issues progressively while staying true to what Maria Clara holds dear. This tension underscores the narrative and Maria Clara’s character development. It challenges the monolithic extremes of what a feminist Filipina looks like. 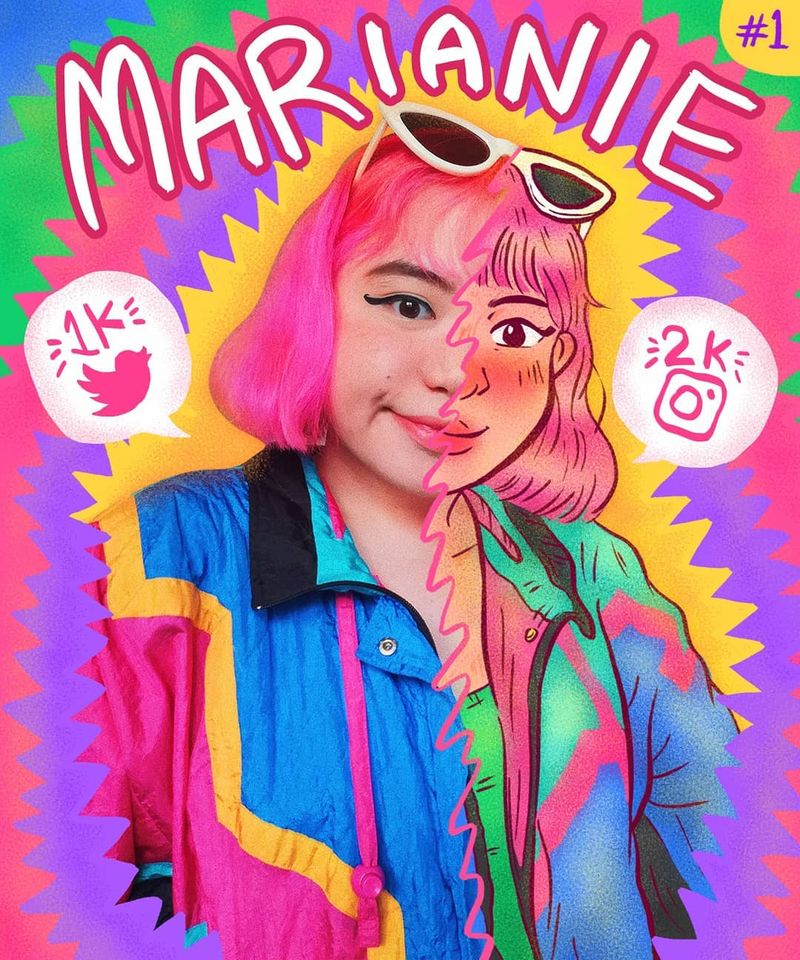 Penlab talks to Marianie about her komiks journey, women in komiks, and what she’s been doing during the lockdown.

1. How did you get started as a comics artist? Who are your influences?

I actually started doing comics back in high school when I was into anime (usual teen stuff). I’d staple bond paper together and make a ‘manga’ about my friends and I. It became a series and the issues were passed around by my classmates. They enjoyed it so much, I just kept making them!

My early influences are of course the usual anime + manga stuff (How To Draw Manga especially). But I had a style shift in college because of western media like Steven Universe, Adventure Time, Scott Pilgrim, etc. Then I uploaded random gag or ‘hugot’ strips online and gained traction, but I only took comics seriously when I did print. I remember my friend selling “Ligaya” comics and I was so mind blown! Wow, people still do the staple-indie comics and there are actually conventions filled with them. So I took a comics elective class, made my first full comic (“Palaso’), and went to a convention for the first time! Both as a merchant and con-goer. It was so fun, I couldn’t get enough and did more events + comics.

2. Tell us the story behind Nagmamahal, Maria Clara. Where did the idea come from? How was it like working on it? May pinaghuhugutan ka ba?

“Nagmamahal, Maria Clara” was actually my college thesis! My thesis partner, Riza Malolos, and I did research on the Maria Clara archetype which is the model Filipinas follow. To be meek, obedient, and dress appropriately. Although we’re both from ‘conservative’ communities, we were the opposite of that haha. We hated how the model was pushed onto us and we wanted to abolish it through our thesis. But research made us realize Maria Clara is a product of her time. Rizal literally meant for her to represent the Philippines under Spanish colonization, which is yes, desirable, but weak. Generations overlooked her tragic fate and passed her on as tradition with lack of thought. So this created a chasm between conservatives and liberals. To the point they bash each other’s lifestyle. 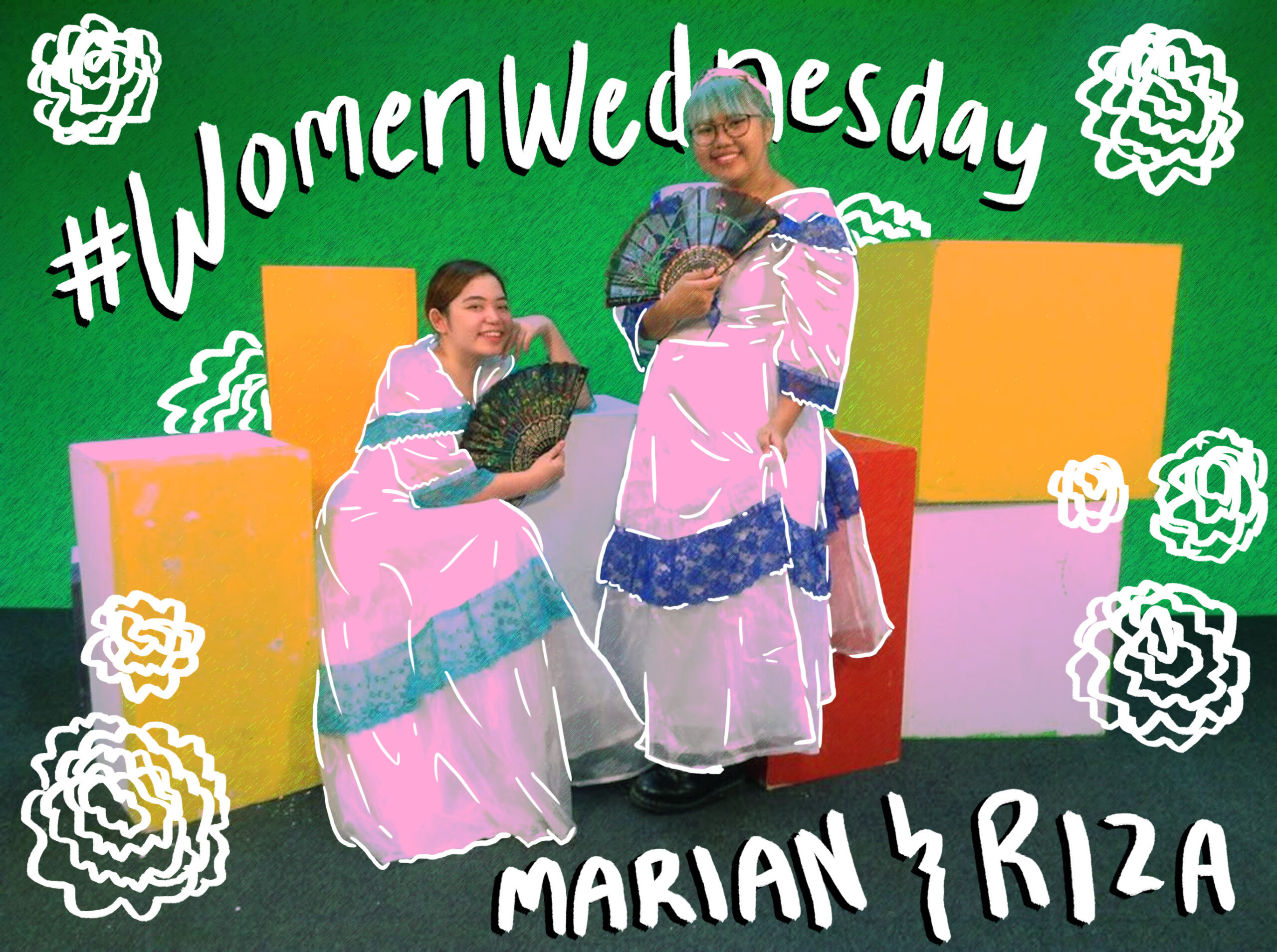 Maria Clara did have shining qualities such as her dedication to her values. So instead of abolishing the model, we decided to make a new one. A model that could represent both the liberal and conservative Filipina, but focusing on dedication and heart. Women should follow any belief they want. As long as they do it from the heart without stepping on anybody. We’ve evolved from the old Maria Clara archetype and should leave it in the past, as a stepping stone to learn from.

As for working on it, the thesis was brutal! We had to make a short film, feature, and comic. But doing a deep-dive research on something that affects us was surreal. We learned so much from people we interviewed such as professors and women organizations (Gantala Press and Grrrl Gang Manila). Aside from production woes, it was a very rewarding experience. Especially when the comic got positive feedback and continued as a women platform after college. We did feminist campaigns, features, and zines!

3. Did you encounter any struggles while making the comic? What about any milestone learnings or achievements?

I’m actually still going through struggles with the comic right now! Haha. There were lots of challenges such as lack of research material for Maria Clara. It was hard to flesh her out as a character with just the novels to work with. I even had a field day where I went to the National Library and Museum to learn more! It was actually fun because I went to spots that she would visit in the comic haha.

As for content, I had to be careful with the issues I tackled too. I wanted to speak for women all around, and not just from my perspective. So it’s constant research and being aware. But doing this was rewarding too because I got to go to women fairs, connect with feminist organizations, and expand my views. It’s a constant learning process and something I’ve become passionate about. Right now, I’m having issues with the content. Everything from the pandemic to our local issues is overwhelming. It’s hard to power through with production so I’m taking a break. 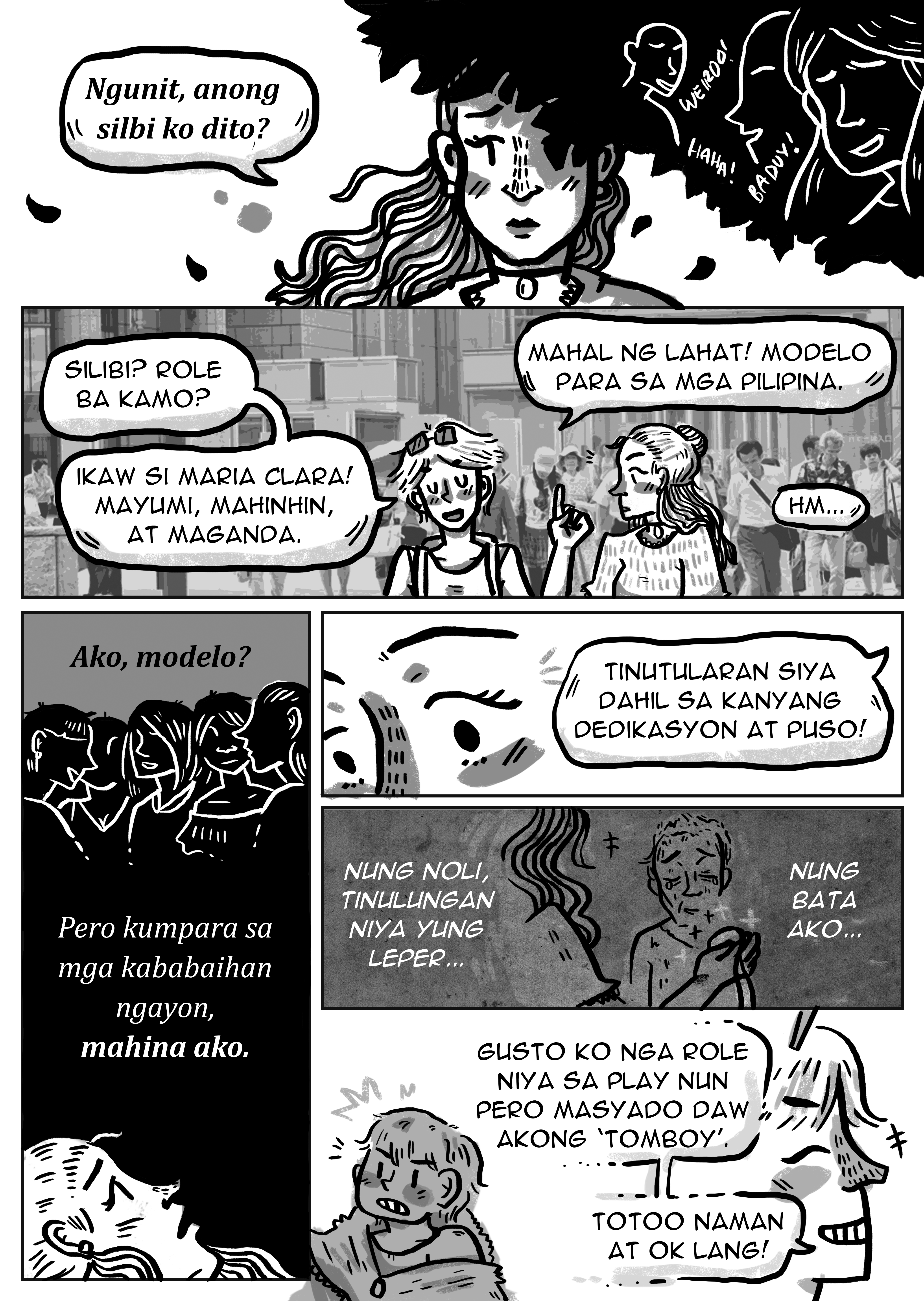 4. What made you choose Maria Clara as a protagonist?

The Maria Clara model got on our nerves back in college so she was an easy pick haha! But for me, I think it’s about how the Maria Clara model was forced onto us and I wanted to see it vice versa. Instead of conservative beliefs being forced onto a liberal mindset (which usually doesn’t bode well), what if it was the other way around? But in a literal sense haha. Maria Clara serves as a clean slate that’s open to learning and evolving. Something I want to see for women, especially here in our country. Aside from this, I was going through a Leonor Rivera phase in college! It’s crazy, but I was fixated on her!

“
Rizal literally meant for her to represent the Philippines under Spanish colonization, which is yes, desirable, but weak. Generations overlooked her tragic fate and passed her on as tradition with lack of thought.

5. What do you think of comics being a tool for social change, specifically for the feminist movement? How do you think the local comics landscape is faring in this regard? Are you inspired by a fellow komikween/komikera?

Comics are a very capable tool for social change. We’re able to create visual content that can influence media and actual people. We can now expand to online as well. With this ability, we can respond with our panels and be responsible — with both our original or socially outspoken content. And it’s great for the feminist movement too, especially locally. When I started “Nagmamahal, Maria Clara”, I was surprised by the attention. I thought there were already A LOT of feminist komiks and I was just dipping in. Although there are great feminist publishers such as Gantala Press, I don’t really see much on the mainstream convention floors. Would love to see more though. And yes, I’m inspired by so many fellow komikeras and friends! There’s comics like Ligaya, Sagala, Point Maam, and more. 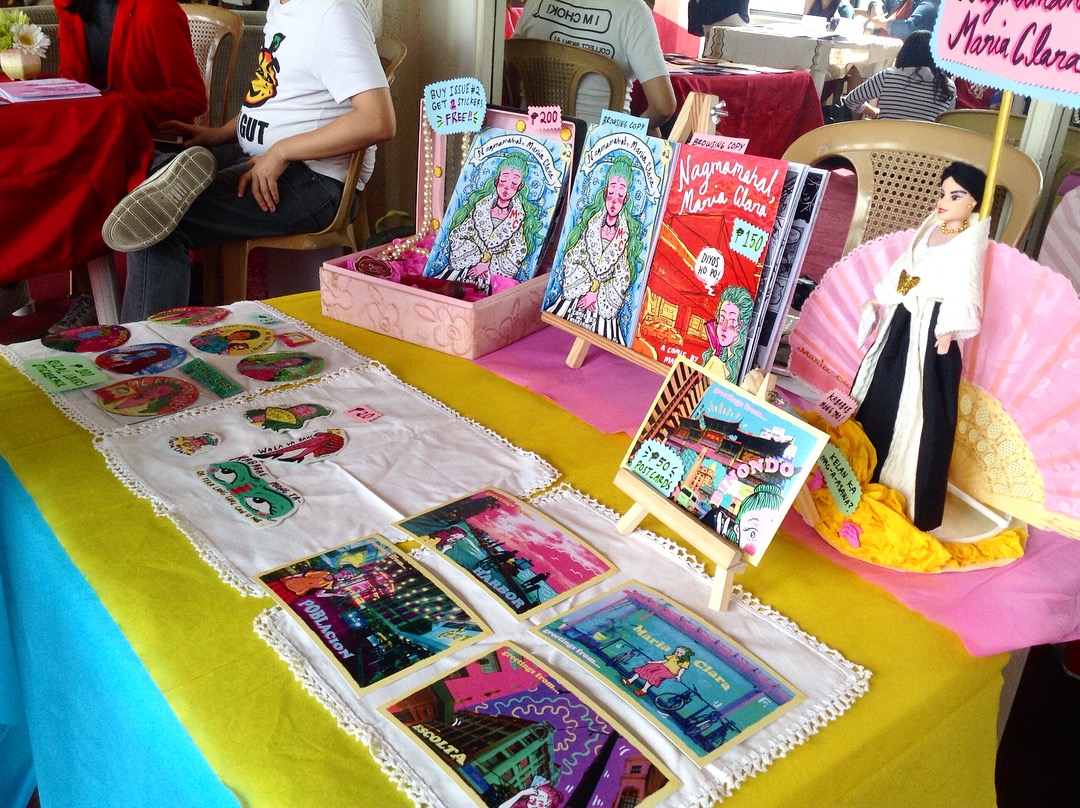 6. What have you been doing during the lockdown? Have you created more art, brewed up any new comics ideas? Are you reading anything right now?

As a Virgo, I’ve been doing a lot of things haha! I learned embroidery, making accessories with polymer clay, and got back into zine-making. I’m really just trying out new mediums for fun! As for my personal art, I struggle a bit with maintaining content on my platforms but it’s ok. I solidified my style and got to meet more artists online too! As for my comics, just the usual small feelsy comics and prompts. I’m working on some collaborations though! (that I’ll keep lowkey hehe). If I’m not being a busybody with my new hobbies or comics, I read books. I just finished two Nightvale (yes, the podcast) novels “Welcome to Nightvale” and “It Devours!”. A weird and amazing wack ride, especially for those who listened to the podcast!

Marian’s comics are available to read in our library. Check her out on Facebook and Instagram, too!